This year, prolonged school closures and the rapid shift to new learning models will have negative effects on learning, students’ and teachers’ emotional well-being, and social connection despite the tireless efforts of educators. When live instruction is able to resume to previous levels, the inequities that existed before the COVID-19 pandemic will be magnified. We need a bold, transformational vision for how instruction can bounce back better.

Leading Educators developed Teaching for Equity as a framework for creating a continuum of educational experiences that support every student to ignite their fullest potential.

Teachers committed to teaching for equity believe in the power of their practice to reduce the predictability of who succeeds and who fails and while cultivating the strengths of every student.

This requires teachers not only be aware of identity and complex needs but to also be experts in their content who deeply understand the tradeoffs of various instructional choices. Put simply, equity is not an “add-on” to standards-based instruction. To support teachers, our framework addresses:

What are the best ways to translate research into practice in my classroom?

How can I account for both rigor and relevance to meet the expectations of the standards while also designing learning that engages my students?

How can I use equitable practices that liberate students as learners instead of furthering harm?

Teaching for Equity describes three strands of educator beliefs and practices that foster equitable experiences and outcomes for every student. Through our work with educators and leaders around the country, we’ve seen exciting proof that it is possible to grow more equitable beliefs over time. The beliefs in each strand of the framework expand upon our existing research to offer an even more comprehensive vision of excellent and equitable instruction in classrooms and the educator mindsets that support it.

Ways educators can create and model caring, affirming relationships across the school community

Ways educators can draw from grade-level standards and curriculum to ensure access to rigorous, and culturally responsive content

Teaching for Equity focuses on inspiring change at the classroom level, centering the agency and power of each educator to teach from an anti-racist lens. From nearly a decade of experience guiding school systems through equitable transformation and a research process that included 35 interviews with education experts and practitioners, we have attempted to make connections across areas of scholarship so that each educator who picks up this tool can take steps toward a more equitable classroom or school tomorrow.

We asked teachers how they experienced equity in schools. In many cases, they started by sharing stories from their life as a student and not as educators. Below are a few consistent themes that started to emerge about the barriers they see:

And it’s something that just helps them towards the main thing which is I’m done. And I often like to just turn that on its head because I think the social, emotional can be a learning in and of itself and nothing else can happen without it. And to me, they’re like inextricable and like…You know, it shouldn’t just be again at the service of like being more efficient as an academic.”

“People now are just beginning to understand the importance of first unpacking their own implicit biases as it relates to how they see themselves. How they show up in the space and what they deeply feel about children. And when I talk about children, especially those that are marginalized. I’m specifically talking about black and brown children. And so, I think that people are now beginning to have that conversation.”

“I have seen so many frameworks during my 12-year career and I like this one, I really do. The problem I normally have is the ineffective or inefficient professional development. In fact, part of the problem is the word PD which most people think of as a one-time grab and go experience. Instead, this should be about ongoing professional conversations and learnings—that’s the way this framework can stick and have lasting meaning and impact.”

Ensuring access to equitable and excellent teaching for students across this country will take all of us. Are you ready to take action?

Head over to our action center for ideas for getting started! Over the next year, we’ll be listening and learning with the goal of lifting up stories that make this vision more actionable. Using these practices in your context will help educators across the country learn more of what works for equity. 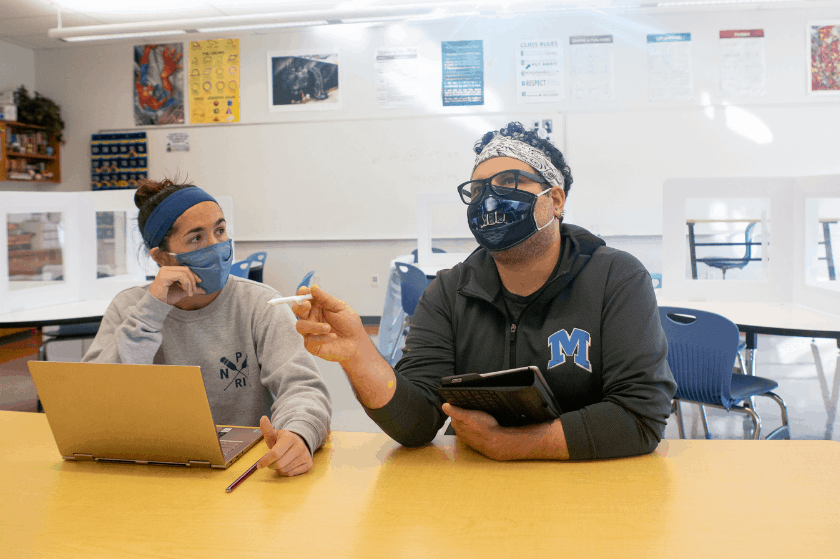 We owe the Chan Zuckerberg Initiative a debt of gratitude for making this research possible.

Thank you also to the Alliance for Excellent Education (All4Ed) and the William and Flora Hewlett Foundation for providing the photography for this site and included publications. All photos by Allison Shelley for American Education: Images of Teachers and Students in Action.