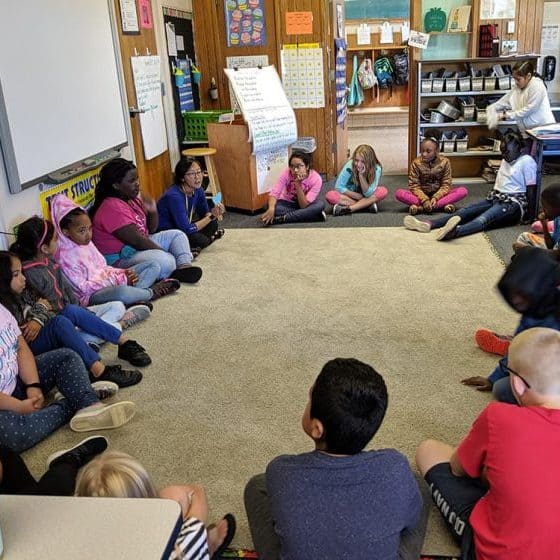 ‘Doing better’ in the classroom — conventional or virtual

“Would you rather eat fried spiders or pickled snakes?”

Kelly Compher found that her North Godwin Elementary fourth graders were pretty well split on the matter, and for various reasons.

“I would choose pickled snakes, because it has the word ‘pickle’ in it,” said one student.

This exchange took place in a Google Classroom, but when her bricks and mortar classroom was open, Compher started each day in a similar fashion: a morning meeting with students, a question, a check-in. The practice transformed her classroom from a group of individual students to teammates, she said.

According to Steve Minard, principal at North Godwin, it is this ability to unite students that makes Compher stand out among teachers: “Kelly creates a community of learners each year with every new class,” he said.

With the spiders vs. snakes debate out of the way, Compher engaged her class in virtual lip-reading, a math riddle, a round of “Hanging Spider” (her version of “hangman”), and a reading of the book “The Hugging Tree,” by Jill Neimark.

“It’s about how a small seed was able to grow through tough conditions and spoke to resilience through difficult times. We all need a text on resilience now,” Compher said after the class. “It was a great 50 minutes with my kids today. Next week we’re planning a show and tell, and the kids are pumped.”

Compher, a Mattawan, Michigan, native, attended Grand Valley State University and completed her student teaching in Godwin Heights before being hired as a paraprofessional at North Godwin. She then taught kindergarten for a year at Coopersville. But when a teaching position opened at North Godwin, she felt the call to return. She was hired and after seven years, she hasn’t looked back.

“Growing up in Mattawan,” she said, “I was never exposed to an urban community before. This is where my heart lies.”

Minard said Compher is “fully invested in teaching and voluntarily takes on new learning and professional development to be the best she can be for her kids.”

Nowhere is that more evident than in the work Compher is doing around equity. In recent years, she has changed everything she thought was right in classroom management after participating in Leading Educators, a program that opened her eyes to how teachers bring their own biases into classrooms.

“Leading Educators really changed my views on equity in education, and changed my whole outlook,” said Compher. “I used to be the really hard teacher that would give the detention, take things away, or move the clip up and down. Now, I’m the complete opposite. I really believe in reinforcing positive behavior and the social-emotional piece of teaching.

“You don’t know what you don’t know and once you do know, you need to do better,” she added. “A good teacher is someone who’s reflective, who changes with the time, and who collaborates.”

Compher’s patience and compassion in the classroom do not go unnoticed by her fourth graders.

“She breaks down the questions into parts so that I can understand better,” student Evelyn Diaz said. “She’s a good teacher because she doesn’t ever rush you into a decision, she gives you time to do everything that you need to do.”

Evelyn said Compher’s teaching of the “box method” of multiplying two- and three-digit numbers has made math easy to understand, and will help her for years to come.

Of academic and pandemics

When schools closed their doors in March, Compher said she went through the grief process.

“Knowing that we had so much good stuff going and having it cut it short was hard to cope with,” said Compher, tearing up a little.

Suddenly confined to home with her husband and 4-year-old son, Compher yearned to do something. As teaching ground to a temporary halt, she started a project. The constant specter of students doing the “renegade dance” was admittedly a bit annoying at school, but she found herself missing it while home. So she rallied staff and compiled home videos of greetings, a song from Minard and, of course, some staff doing the renegade dance.

And when the time came, she got back to doing what she does best: teaching.

“Kelly puts her heart and soul into teaching,” said Beth Richardson, who also teaches fourth grade, in a classroom next to Compher’s. “I have had the privilege of working with her on virtual math lessons since we have been quarantined, and love hearing and seeing her ideas. She knows the right amount of ‘push’ to give students, making sure they are challenged but also successful.”

Compher said virtual teaching has been an adjustment, but support from colleagues and instructional coaches has lightened the load.

“We’re constantly text messaging, emailing, and video calling to share ideas, get help, and to celebrate,” said Compher. “We’re doing everything we can to help our kids from afar but we certainly miss being in the classroom.”

Evelyn said that while she misses seeing her teacher and her friends each day, she has found things to like about her virtual class: namely, “the encouraging emails that [Mrs. Compher] gives me every time I get a question right.”

Despite the new setting, it’s clear that Principal Steve Minard’s words about Compher translate well to the virtual classroom: “Kelly models professionalism, positivity and enthusiasm for teaching every day.”

This piece is reprinted from School News Network. The original version is available here.